My ten-year-old son and I wondered if we should participate in the Disney Cruise Castaway Cay 5K.  We decided to give the 5K a try and we enjoyed the time together and the opportunity to exercise and see different parts of the island.

Here is a journal of our Castaway Cay 5K experience and a picture of the medal we got in January 2020. 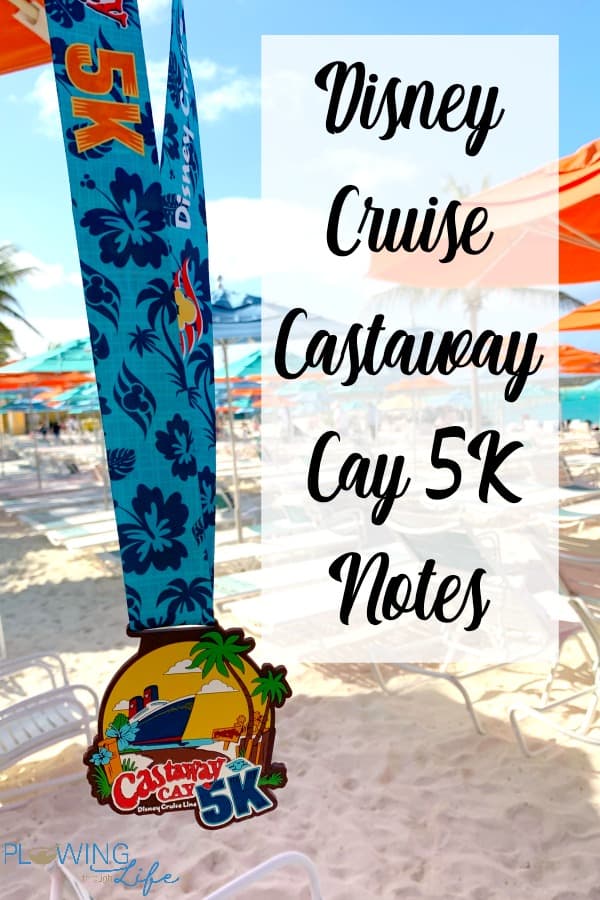 For an overall review of Castaway Cay check out these tips from our family.

Preparing For The Castaway Cay 5K

In January 2020 I went to the 5k meeting in the D Lounge which was on the navigator and took place immediately after the “Sail Away Party”.  Since my 11 year old had participated before and was familiar with the route and my son wanted to do other stuff on the ship, I went alone to fill out the paperwork and give him consent to participate.

All of the race details were covered at this meeting.  Constent forms were signed for adults.  I had to sign a slightly different and longer consent form for my son since he is under the age of 18.

Race numbers and safety pins were also passed out at this meeting.

The time that you get off the ship and how you get to the 5K start line, which is right next to the bike rental area is your choice.  One year we walked, another year we rode the tram. 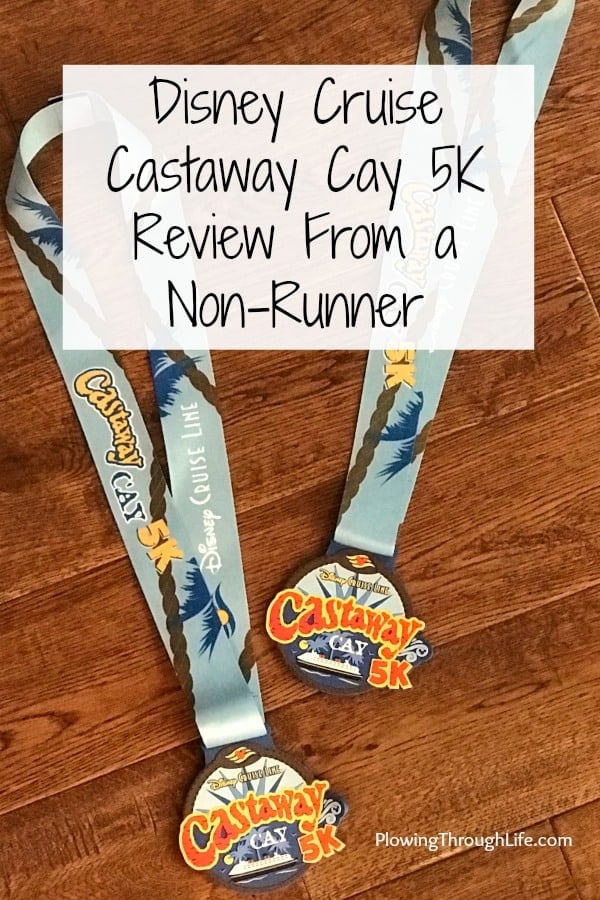 In January 2019 we had to go to guest services the day before docking at Castaway Cay to sign up for the 5K.

Our Navigator (the daily agenda that is in your app or a paper copy can be picked up by Guest Services) listed the meeting time and location for 5K participants.

The morning of the 5K we met in the District Lounge (adults only lounge) at 8:00 a.m.

Our only option for breakfast was the cabanas which were perfect.  We ate outside and watched as the ship docked.  We allowed time for a restroom break and arrived at the District Lounge at 8:00 a.m.

5K participants waited in line to get numbers to pin onto our shirts.  Then we sat in the District Lounge for a long time – as of early 2020 thank goodness this problem seems to have been addressed.

Participants disembarked the ship as a group.  We waited so long in the lounge that we were definitely not the first ones off the ship.

Disney Cruise staff kept the group loosely organized.  We definitely did not walk as a pack to the start line.  5K participants were asked not to ride the trams multiple times, but I’m confident several people did.  Walking from the ship to the 5K start line took about 10 to 15 minutes.

The time that your ship docks at Castaway Cay can vary, so this schedule is based on our personal experience.  In 2019 everything seemed to run a bit behind schedule.

The Disney 5K starting line is very well marked and right next to the bike rental area.  We followed signs to bike rentals.

What to Bring to the 5K

There is a treasure chest on Castaway Cay at the 5K start line that you can store your bags and personal items in while completing the race.  We didn’t know this existed so we didn’t carry anything like our swimsuits with us.

You can also put your belongings on a louge chair on the beach before the race begins.

We were given cups for water and the cast members told us we had to keep track of our cup the entire race, so I’m glad I had a pocket to put my cup in.

Check the Navigator for meeting time and location – ours have been District Lounge at 8 a.m. the day of the race OR in D Lounge the evening before the 5K.

I typically walk the majority of the 5K and finish in just under an hour.  There is a digital timer at the finish line to clock your time.

The first time we went back to the ship to change into our swimsuits.  We grabbed some ice cream on the ship and arrived back at scuttles cove on the tram at 10:45 a.m.

The second year we packed our suits to save an hour of time and just changed on the island.  We set our bags on beach chairs on the way to the start line in 2020 since we didn’t have to walk as a group with other participants.

There is a chat function in the Navigator app, but it seems to take minutes to hours for messages to come through.  While it is better than nothing, it is no where close to instaneous text messaging that we’ve become used to.  So having a tentative plan ahead of time is optimal.

Keep in mind that things are spread out a good bit on the island to accommodate big groups of people.  This means a lot of walking, which is a good thing for the body after eating so much on the ship.

But it also means that 5K is nearly a two to three-hour commitment including time to change clothes.  So if your goal is purely to exercise then I just recommend going for a jog or walk on your own schedule.

Can You Walk the Castaway Cay 5K?

Yes!  I have never run a 5K.  Walking the Castaway Cay 5K was the first time that I’ve ever walked in a 5K.  My ten-year-old son stayed with me part of the time and then after getting comfortable with the route decided that he wanted to run.  He just waited for me at the finish line.

The second year, my now eleven-year-old son knew he could run the race in about 30 minutes so my husband was waiting on him at the finish line while I walked.

We were the first to the start line and a Cast Member arrived after ten minutes or so to officially start the race.  A few people sped off into the morning sun.  A good group of people jogged at a nice pace.  Several of us walked.  The atmosphere was very calm and friendly.  I did not pick up any sense of competition.

By the time I finished they were running out of water on the course and out of medals, but it was not a big deal because they had them delivered to our staterooms the next day.

Our visit was in late January 2019, so the weather was in the 70s and very comfortable.  It was nice to have water along the route, but I would’ve been fine waiting until the race was over to get a drink too.

I’m not particularly fit, but I certainly enjoyed participating in the 5K!

The 5K start line is next to the bike rental area and a building with Olaf on the side.  The entire course is paved and fairly level.

After starting the 5K route briefly follows a paved road to an old airplane runway.  Then there is a water station where you turn right into a loop that is about 5,000′.  The loop is surrounded by vegetation, so there was some shade.

There are trams hauling people to Serenity Bay on the airstrip and bicycles in all of the areas towards the end of the race.  The airstrip is plenty wide enough to accomodate all kinds of traffic.

The route was the same for us in January 2019 & 2020.  I have seen discussion in Facebook groups that Disney may be experimenting with new routes.

First follow the red arrows on the map, then follow the white arrows for the second half.

My son and I are really glad that we did the 5K together because it was a great experience, we got to spend time together doing something new and we got to see more of the island than we would’ve otherwise.

He is really proud of the medals that we were given.  It also felt good to get some exercise when the food is so plentiful and amazing.

The second year when he ran ahead of me immediately I enjoyed making a new friend to talk to while we walked.

My husband went back later in the day and checked out the lookout tower at the top of the 5K loop and snapped this picture.

Whatever you decide to do we hope that you enjoy your Disney Cruise as much as we did!

Other Tips for a Disney Cruise: 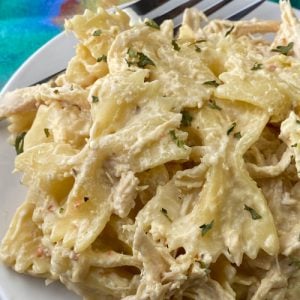 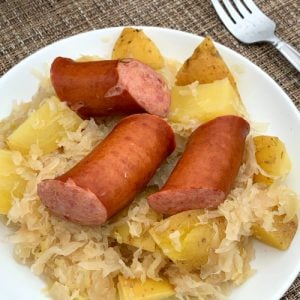